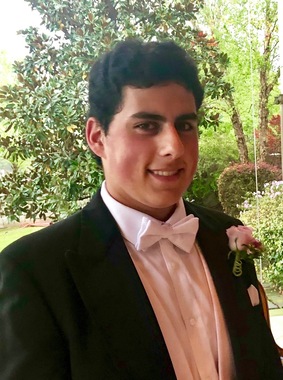 Back to Brandon's story

Brandon Joseph Sayegh passed into the arms of our Lord following a tragic car accident on December 23, 2019. He was born on March 2, 2001 in Dallas, TX and was baptized at Holy Trinity Greek Orthodox Church. He was a faithful life-long member of the church, where he participated in Sunday School, served as an alter boy, and become captain of the altar boys. Brandon grew up in Plano, TX and was a warm, kind-hearted young man, always talking and smiling. He was constantly surrounded by his parents, Brenda and Jason Sayegh, and two older brothers, George and Stephan, who he loved very much. He attended Wyatt Elementary School. At Rice Middle School, Brandon was recognized for his leadership on the football team when the Rice Ravens won the City Championship. He attended Jasper High School, where he was a committed football player. Brandon graduated from Plano West Senior High School with honors and had perfect attendance from kindergarten through twelfth grade. He was also President of the Young Men's Service League, and dedicated himself to many hours of community service. He served in leadership as a Sentinel in the FFA, traveling to high schools throughout Texas debating other top students, as well as a member of the national FFA organization. During his summer vacations, he loved going to the beach and enjoyed time in the sun with his family. Brandon was a freshman at Texas Tech University, majoring in agriculture. He was an active member of Alpha Tau Omega fraternity, and adored his many new brothers. He had a giving nature, finding joy in the success of his friends. You could always find Brandon listening to country music and dressed as the consummate cowboy: in a feathered cowboy hat, a bolo tie, a big belt buckle, and boots. Brandon loved East Texas, where his grandparents live. He worked tirelessly for the benefit of others, and was known as a young man who did nice things when nobody was watching. Brandon leaves behind a legacy of kindness, selfless devotion to others, charity, and faith that will forever be treasured by his loving family and friends, who will greatly miss him. He cherished spending time with people, always reaching out to help others, whether they were his closest friends or complete strangers. Brandon is survived by his his loving parents, Mr. and Mrs. Ghassan George Sayegh Sr. (Brenda), his brothers, Ghassan George Sayegh Jr. and Stephan Frank Sayegh. He is also survived by his maternal grandparents, Mr. and Mrs. Frank George Sr. (Jeanette) and his paternal grandmother, Mrs. Souad Sayegh. He is survived by beloved aunts, uncles, and many cousins. He was preceded in death by his paternal grandfather, George Joseph Sayegh.
Services will be held at Holy Trinity Greek Orthodox Church at 12:30pm on Saturday, December 28, 2019, with a luncheon to follow. Burial will be in Palestine, TX at Roselawn Park Cemetery.
In lieu of flowers, the family has requested that donations be given to St. Jude Children's Research Hospital at:
ALSAC/St. Jude Children's Research Hospital, 501 St. Jude Place, Memphis, TN 38105
Published on December 26, 2019
To plant a tree in memory of Brandon Joseph Sayegh, please visit Tribute Store.

Plant a tree in memory
of Brandon

A place to share condolences and memories.
The guestbook expires on March 25, 2020.

Kelly Roche
So sad........prayers your way!
Robyn Arnold (wife of Ray Arnold 1978 graduates with you)

Ray and I extend our deepest sympathies to you and the family. We can only imagine how difficult a time this has been. Brandon sounds like an exceptional young man who put others before himself. He and Ray have something in common, both never missed a day in school. What a commitment you precious son had throughout his life. Mere words can’t express our loving thoughts to you.