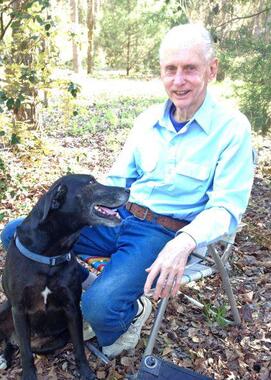 Back to Kenneth's story

Kenneth (ken) Neff, age 86, passed away on July 12, 2019 after a short illness. Ken was born in Kansas City Missouri to Ralph & Loretta Neff. He had three older sisters and is survived by sister, Marjorie McDonald, of Glenview Illinois and a large extended Neff family.
After graduating from high school in Chicago, Ken entered the New Mellery Monastery where he was a monk for 13 years. At that time, he and 3 other monks started the Bellville Monastery in southern Illinois where he practiced for 18 years. He moved in 1969 to a hermitage located in Northern Anderson County and became a hermit for 18 years. In 1987 he purchased land, built a cabin where he lived, and started his volunteer work in the Palestine area.
In 1989 he became a VISTA Volunteer, worked with the child protection services, & the abused women's shelter. Up until January, he held weekly rehabilitation classes for inmates at Beto Prison, assisted at the Palestine Resource Center, the Anderson County Crisis Center, and the Palestine Regional Hospital - all volunteer work.
Ken helped hundreds of individuals over the past 32 years. He wanted to be remembered as a person that lived "A SIMPLE LIFE OF REFLECTION & SERVICE." He will be missed by his numerous friends.
Ken requested no final services and any donations in his memory be sent to the United Nations Children's Fund in New York.
Published on July 17, 2019
To plant a tree in memory of Kenneth (ken) Neff, please visit Tribute Store.

Plant a tree in memory
of Kenneth

A place to share condolences and memories.
The guestbook expires on October 15, 2019.

Restore this Guestbook to share a memory or message of condolence of your own.